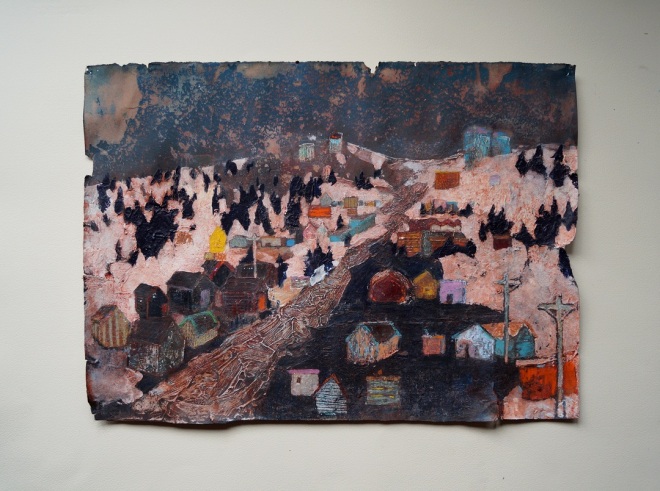 Information about the RSA Travel Awards:

I am about to re-visit the place of my birth, Yellowknife, Canada.

I have always, perhaps instinctively, felt the need to go back there.  It is as if ‘Yellowknife’, the place, has left its imprint upon me.

Within my new work I hope to explore and communicate ideas to do with having a strong bond with a place, and also feelings of ‘existence’ within wilderness in an intimate and more intense way. I will continue to make work in an attempt to somehow encounter, or recover my experiences of northern wilderness.

“Catherine Ross, who won the Gordon Memorial Trust Award during RSA New Contemporaries 2015, receives her second RSA award in the same year, with the Littlejohn Award for excellence and innovation in water-based media.

Having graduated from Gray’s School of Art last year, Ross now works as a painter and model maker. She will use the £2000 prize money to revisit her place of birth – a remote city called Yellowknife in the Northwest Territories of Canada – to research mankind’s interaction with nature and solitude.”

“A total of £9000 has been awarded by the Royal Scottish Academy of Art & Architecture (RSA) to one established artist and two recent graduates. The money will be used to fund new bodies of work and research trips to the USA and Canada. All three prizes have been awarded through an open submission to artists based in Scotland.”